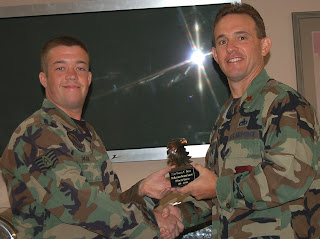 So it's about time that I mention how proud I am of the boy. Not only did he win the NCO of the Quarter board that I mentioned a few posts down, but he also went on to win the NCO of the Quarter for the entire Maintenance Group and will represent them in a board for top NCO of the Quarter for all of Luke AFB. This is such a great accomplishment and I'm so proud of him for all he does. This award comes from not only his interview in front of a board, but also from recognition of his community service, leadership skills, and character. I am so lucky to have a man that doesn't go in to work just to bring in a paycheck - he does his job honorably and makes an impact on many other lives. Our kids will be lucky to have such a great father.

In less important news, I am in the middle of a crisis. No, I didn't accidentally overdose on Percocet (again), and I don't need another surgery. I need a new hair stylist. My favorite stylist of all time 'retired' to be a full time mom 6 months ago and I've been stranded, alone of the island of bad hair since then. What was once long feathered layers had turned into a mane reminiscent of a 60's hippie wig. It's dark, it's poker straight, and it just lays there. It's also waaaay too long. I love having long hair, but when it's getting caught in the back waistband of my jeans - well, that's just taking things too far.

So next week, I will venture into the world of first dates with stylists. We will chat nervously about celebrities, maybe drink a sparkling water, and see if there is any chemistry brewing. If God is on my side I will hopefully be sporting a much sleeker head of hair the next time any of you sees me!
Posted by Christina at 1:04 PM 2 comments:

The Double Quarter Pounder of Death 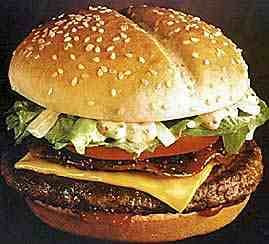 As I mentioned earlier, I've been the worst housewoman ever over the past few weeks. I get home from work exhausted, in need of several pain killers, and not wanting to do anything but sleep. I used to cook dinner almost every night, and make sure there were plenty of (healthy) leftovers for Corey to take as lunch the next day. Well, as I haven't been cooking in the first place, there haven't been leftovers to take. Thus begins the story of how a double quarter pounder ruined our Wednesday.

The boy has school on base until late on Tuesday and Thursday nights. This means that I have to pack not only a lunch for him, but also a dinner. With my lack of cooking, I must confess I was turning a blind eye and pretending that my darling love was probably picking up a nice garden salad and tofu crisps to satiate his hunger. I secretly knew he was running thru the drive-thru and chose to ignore, so I take the blame.

Tuesday night he got home around 10pm complaining that his stomach had been hurting all during class. I gave him Tums and Mylanta and we went to bed. 20 minutes later he was still tossing and turning and complaining of his belly hurting. I found it odd, and asked what he'd eaten. "Oh, I had McDonald's," he answered sheepishly. "But what did you have at McDonalds, darling?" I knew immediately it wasn't going to be good from his guilty face and he reported that he'd only had a double quarter pounder with cheese, fries and a coke.

By 2:30 am the pains hadn't gotten better and had migrated to his right side. His abdomen felt rigid to me and with both of us thinking he might have a little appendix problem we jumped into the car and rushed to the Emergency Room. Let me just say that if he had needed an emergency Appendectomy I would be writing his eulogy right now because he would have died waiting to be seen in the emergency room. By 5:something (the sleepless hours blurred together) he was told to drink some CT Scan solution and miraculously, he started feeling better.

A Doogie Howser resident stuck on the morning shift finally came in and told him that they had no idea what was causing his pain, and that it could be gall stones. I had a sneaky suspicion it was more like a grease attack, but I kept my mouth shut.

By last night he was home in bed and feeling much better - trying to get me to serve him five pounds of the fajitas I made for dinner. I think that men must have errant DNA leftover from the caveman days telling them that they must consume all edible material within a two mile radius in preparation of famine. Corey is not a big guy, but if I let him he could scarf down enough to feed a Roman Catholic Italian family and then yell from the bedroom, "Babe, do we have anything to eat?"

If any of you watched The Cosby Show growing up you'll know why I always expect to find the middle eaten out of the lasagna and stuffed with paper towels. Luckily, my baby is still an amateur. 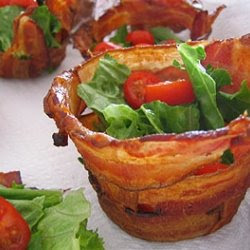 I don't know if this is an issue for all of society, or simply a personal defect: I am physically unable to wake up on Monday mornings until around 10am. This ends up being problematic as Corey leaves for work at 5am and I follow at around 6:15. That means I've been at work for several hours before I can formulate complete sentences.
It's espeically difficult when you screw up your sleep cycle with late nights over the weekend, which we did in Pinetop. Granted, I'm ancient now and late nights mean past 1am for me, but still. So, if you're reading this and thinking that my writing resembles a 3rd grade essay on what I did over the weekend you now know why - it's only 8:30 on Monday morning.
We got out of town late Friday so we didn't make it up the mountain until close to 10pm and I was grouchy and tired and in mounds of pain even though I took 3 percoset. Needless to say, it was not a fun roadtrip. The rest of the 'vacation' was great though - the boy played golf and actually beat my Dad on one hole (which I guarantee will never happen again) and I got to cook a full meal for more than one person. I made Crab Stuffed Filet Mignon with Cabernet Blackberry reduction, creamed fresh sweet corn, and broiled parmesan asparagus. The first course salads were these bacon bowls, which I thought turned out adorable. That was followed with lemon meringue pie and my mom's first taste of homemade chocolate souffle, which I fear she loved a little too much. The best part was that we've been getting my mom new knives to replace the ones she got as a wedding present (33 years ago) so I was actually able to prepare the steaks without hacksaw intervention. Hallelujah. Now, if I can only get her out of the house long enough to replace her 1970s mustard colored stove.
We had my Dad open his Patron silver and the wallet we got him for Father's Day and hit the road yesterday to make it back here in time for our self imposed 8pm bed check. So, even though we had less than 48 hours in the mountains it was a nice respite from the hellacious heat (and my lack of cooking). The boy's already dreaming of repeating the 7th hole over 4th of July weekend.
Oh, and although it's completely off the topic of this post - the boy won NCO of the quarter for his squadron and I couldn't be prouder. I mean, I'd pick him as the winner but I had no idea that the commanders of the Air Force are nearly as smart as I am. Cross your fingers for his even bigger board tomorrow!!

Posted by Christina at 8:31 AM No comments:

To avoid any confusion - no, we didn't get hitched yet so my last name is not yet Park. However, his last name is cooler than mine and I'll be taking it anyway so that's why I called it "The Park Family". We do have a plant, so technically there are three living things in our house. That constitutes a family, right?
Posted by Christina at 1:48 PM No comments:

So everyone has a blog, and I feel left out. But, the problem is that we don't have cute kids and dogs to put pictures up of, so I'm not entirely sure what this blog will be for. I guess at the very least years from now our kids can look back and see what a boring life mom and dad led before them.
Today was my fourth bladder treatment - only 2 more to go - and it's getting easier and easier every time. Those of you that have had a catheter know that it's not exactly how you'd like to spend your Saturday nights, but it has been tolerable. And the really great news is that I think it's making a difference. We'll see for sure next week, but I'm very optimistic that my Percoset habit can be laid to rest very soon.
The boy (I call Corey "the boy") has a board tomorrow for NCO of the Quarter, which I think is a much bigger deal than he does - and I'm so proud of him. We'll celebrate by driving up to the White Mountains and visiting my parents. The boy hates the heat and is happy to discover that not all of Arizona smells like a landfill, so we usually have a good time. I cook, he golfs with my dad, we watch movies on their ginormous TV (and then I spend 4 hours in the car listening to why we need a ginormous TV).
I'm not sure yet what I'll cook but usually it's creamy, buttery, sugary goodness and they eat every bite. I've been such a lame house wench since I've been sick and the boy is lucky if I have anything ready to go for him when he leaves for work at the crack of dawn. I'm convinced that my cooking is the sole reason he fell in love with me in the first place so I better step it up! Who knows how many brunette Yankee cooks there are out there just waiting to snatch up my uniform wearing Southern man.
Posted by Christina at 1:01 PM 1 comment: