The day the third baseman broke my heart 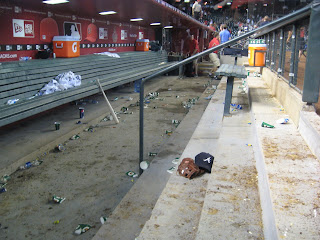 In psychology they teach you that your world view is cemented by the age of six. In my case, my professional sports view was also in place by an early age. I’ve been a Dallas Cowboys fan for as long as I can remember, and a Braves fan for almost as long as that.

It was hard not to be a Braves fan as a pre-teen girl when you saw David Justice come up to bat. The proverbial bad boy, there was an edge to him (you don’t have to tell that to Halle Barry) that made him seem dark, mysterious, and dreamy. Winning homeruns in the 1995 Championship and all over the news at the same time for his drama off the field made him seem as Danny Zucco-ish as could be. At the same time there was his counterpoint; the good boy to his bad: Chipper Jones. I always liked Chipper Jones when I was a kid, not because he was so cute (although he was) but because he was solid. A great baseball player, a charity volunteer, always smiling with his, “Awww, schucks, I’m just a small town boy” smile.

The days of David Justice passed, but I’m nothing if not loyal so I remained with the Braves through thick and thin. Like the Cowboys, we had some good years together in the 90’s, and Chipper came back year after year as one of the most consistently great baseball players in the league. Even though it wasn’t love at first sight, he grew on me and eventually became my all-time favorite baseball player who could do no wrong. Until last Sunday.

Feeling a little better, I dared to venture out when my Dad called and said he’d managed to snag some amazing tickets to the Diamondbacks/Braves game due to his fantastic marketing contacts. We try to at least make the Braves game every year and I knew I would be furious with myself if I missed it to lie in bed. Had I known what he meant by amazing tickets I would have gone even if I was having a heart attack.

The dugout box. It’s a suite attached to the dugout at field level. It means that I was sitting ten feet away from Chipper Jones, Bobby Cox, and every other member of my favorite franchise. It means that I reached out in front of me and felt the red clay, and looked over my left shoulder and gazed right into the visiting team locker room.

My dad gets amazing tickets all the time, but they’re usually up in the corporate suite level – far away from the action. Generally, I love this. Private bathrooms, catering and waitresses, separate elevators. But this was a different way to view things. Here we were right in the middle of the action. And while the magic of the game of baseball was even more prevalent, the magic surrounding our favorite multi-millionaire baseball players becomes tarnished a little when you’re sitting ten feet away.

After rushing to the team shop to buy a twelve dollar Sharpie, we sat poised to get autographs, talk to the team and basically become best friends with Chipper Jones so he would invite us to summer with he and his wife in Atlanta and go on the road for series’ in Toronto, New York, and Seattle.

Unfortunately, I was in no shape to be yelling to anyone so my darling husband took it upon himself to start the dialogue. Unfortunately again, my handsome husband does not have breasts like the blonde in the twelfth row behind the dugout had so he was, for the most part, ignored. Even after yelling, “Chipper, my wife loves you!!!” loud enough for the entire stadium to snicker, he still couldn’t manage to snag an autograph as Mr. Jones was too busy dipping into his chew can and spitting juice all over the dugout. In the sixth inning stretch Chipper disappeared into the locker room below and never reappeared, not even to shake hands after the game.

Not a total loss, Bobby Cox did toss us a game ball at the end and eventually Corey resigned to leave his post at the suite door, finally deciding that Chipper wasn’t coming back.

Crushed that my baseball boyfriend might not be as perfect and charming as I once thought, I managed to make it home and hit espn.com to see if there was some injury I didn’t know about that was plaguing my star and would cause him to snub the Diamondbacks like LeBron.

Although I did find a toe sprain record, (toe sprain?) I also found an interesting blurb on Wikipedia explaining why Chipper and his first wife got divorced while I was busy pining over David Justice – he had a two year affair with a Hooters waitress that resulted in a child. Who the hell has a two minute, let alone a two YEAR affair with a Hooters waitress? Checking out her assets is one thing, but engaging in a relationship is a completely separate offense even if you’re not married.

After being let down by countless athletes I was sure I had it right this time, but it turns out that it’s harder to find athletes with morals than you’d think. First Tony Romo with Nick Lachey’s sloppy seconds and now this? Devastating.

All I have left to cling to now is the goodness of Kurt Warner and the knowledge that, although unemployed, I do not have the job of cleaning up the dugout after MLB games.

Thank you God.
Posted by Christina at 4:36 PM 2 comments: