Day Four (the suffering of the carnivore)

I will give my husband credit, he did sign on to this challenge even when he knew he would have a hard time with it.  I'm not sure even he expected the depth of his soda addiction though, because it has been like detoxing with Bobby Brown around here.

On day two I made red lentil curry over brown rice for dinner, and even though we had naan with it (naan makes everything better) Corey still reluctantly gave the meal a 6.5.  Still happy that he made it though a day without meat, I pushed my luck yesterday on day three when we grilled whole wheat pizza outside and I didn't have any meat toppings.  To be fair, I offered chicken sausage to Corey for his, but I think by that time he was so hungry that he didn't want to wait for cooked meat.

Not wanting my husband to succumb to salmonella from raw chicken pizza, we instead topped them with veggies and he pretended to be happy to at least be having pizza.

Tonight I finally cut him a little slack and made swedish meatballs, which I make fairly often and he loves, and just added whole wheat noodles, mashed sweet potatoes and corn on the cob.   This was Brooke's first experience with corn on the cob and it was both hilarious and heartwarming as she daintily held her corn cob handles and plucked the kernels off with her tiny teeth.  She is actually eating quite well so far and I'm hoping that the fact that the doctor doubled her Prevacid dose is helping (another post about the kid will follow).

Even though we've already had the batch of graham crackers, and I stocked up on delicious Be Kind bars, I think Corey is having a hard time not going to the pantry and pulling out delicious things to snack on.  I rarely buy anything like chips or cookies, but now that he's faced with not having them available they are suddenly much more appealing.

Luckily, we swung by Trader Joe's yesterday to watch Brooke push her own tiny cart and we picked up some Hansen's all natural soda made with cane syrup.  Still totally unhealthy, but if it keeps Corey on board with our game and it's not breaking the rules then I am satisfied.

I'm going to have to step up the snack type food selection in our house so tomorrow I will spend Brooke's nap scouring the internet for delicious recipes, and I'll make some carrot chips too!

I'm far too tired to give this post the attention that it deserves, but the sad truth is that if I don't leave a nice little update as to how our first day went I will be extremely less likely to make little updates in the future.  I realize that makes me juvenile, and pessimistic and displays an inability to commit myself to a task completely, but that doesn't make it any less true.

So, long story short - not much to report.


I got up this morning and turned on the oven first thing (at 6:22am) so that I wouldn't be baking while it was more than 115 degrees.  I rolled out the graham cracker dough, baked it in sweet little star shapes, and presented it to my daughter.  She took a tiny bite, handed it back to me with an enthusiastic "No!" and went about her day.

Corey and I think they're delicious though so at least they'll get eaten.

Other than the delicious bite of graham cracker, Brooke ate pretty much what she normally does:  an egg and a few bites of french toast for breakfast, Aunt Annie (who apparently knows her way around a graham cracker much better than I do) bunny grahams for a snack, veggie sticks in the car, peanut butter on wheat bread, and half an avocado and grapes for lunch.

I had this cereal, which is super crazy delicious, and milk for breakfast, tuna salad made from a can of Trader Joe's delicious chunk tuna and the other half of Brooke's avocado, and some banana for lunch.

Corey sucks at eating while he's working so I was lucky to get him to eat a sprouted bagel and last night's chicken pot pie leftovers while he was gone.  When he came home he had a banana and a bowl of the amazing cereal to wash it down with.

For dinner I made an old standby - caramel apple pork chops and mashed sweet potatoes.  Brooke surprised us both by shoving a fork FULL of sweet potato in her mouth before we could even sit down and she polished off an entire serving along with a few bites of pork which is very out of character for her.  I ate the sweet potatoes and yogurt.

And there you have it.  I'm certain that was the most boring post I've ever written (or read) but at least I'm holding myself accountable by describing every morsel we pop in our mouths.

Corey did quite well today and was only half joking when he called in the afternoon to ask me if a McDonalds milkshake is all natural.

I didn't bother googling and just told him no, but if by some slim chance of fate shakes are the only thing that McDonalds doesn't add artificial flavors, colors and growth hormones to please don't post that in the comments until 29 days from now.
Posted by Christina at 8:35 PM No comments: 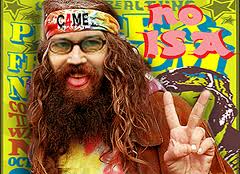 I've talked about my newfound hippie-ish tendencies on this blog before, so this probably won't surprise any of you, although you may find yourself shocked that the fast-food loving, soda-chugging caveman I married is going along with it:  The Park family is embarking on a 30 day all natural eating challenge.

What does this mean?  Will we be eating wheat grass clippings and doing juice fasts and only consuming things that haven't been heated over 86.2 degrees or dried on adobe planks in the sun?  Not quite.  At least, not for us.  But if that's the route you want to go, more power to you.

For us, it means no preservatives.  No artificial colors or flavors in anything.  No Jack in the Box.  Some of you will think this is no big deal at all, and others will cry out loud and try to figure out how to smuggle Sundrop to Corey at work.

For me, it is truthfully not going to be that big of an adjustment.  Or so I think while I'm still here in the planning stages.  But, I cook almost everything we eat from scratch and besides the occasional Lean Cuisine or plastic wrapped square of American cheese product (stop judging - you know you love those things too) I eat natural foods.

And I can count the times that Brooke has had something artificial on two hands and almost all of them involve Grandpa sneaking around like the Grinch at Christmas and shoving a chunk of taffy between my child's rosebud lips while he thinks I'm not looking.  In fact, I take great pride in the fact that this past week he tried to feed her neon red Icee from the machine in the Circle K while we were watching the Fourth of July parade.  She looked at him like he'd grown two heads and said, "No, Grandpa.  That's not organic."

Okay, she just said, "No!"  but that was good enough for me.

So, that leaves the rebel patriarch of the family.

For the most part he eats what I feed him, but he has never been one to shy away from a Dr. Pepper on the way home from work, a breakfast burrito because he forgot to grab breakfast, or a double quarter pounder and grande fries just because he didn't want to eat the stir fry I packed him for lunch.

So, when I broached the subject I treaded lightly.  I led with the goal of the experiment, which is to buy all of us a little more energy and help us feel a little less heavy especially here in the 110 degree heat.  Since Corey has a class right now he spends most of his day on the flightline, where it is at least 15 degrees hotter than the rest of the city, and to say that he feels drained by 2pm is an understatement.  So, I'm crossing my fingers that replacing simple sugars with more fruits and veggies, and more lean proteins is going to help him out a little.

It's not a weight loss plan, but I won't be upset if I drop a pound or two that seem to have taken up permanent residence on me since our cruise.

What I really want to do is get over the 3 o'clock hump that I currently have where nothing in the world sounds better than crawling into the crib with Brooke and taking my own power nap.  And if organic bananas and homemade salad dressings can do it then I feel discovering the meaning of life is soon to follow.

Because I wasn't sure this was enough of a challenge I'm also going to be forgoing plastic bags, which I try to do all the time but always manage to forget them in the trunk or on the counter at home.  I'm also going to be limiting canned, bagged, frozen, and pre-prepared foods - even the natural ones that are acceptable on this plan - and doing my best to stick to raw, clean foods.

Brooke drinks boxed organic oat milk so that's still in, as is her weakness:  Annie's Organic honey wheat pretzels.  I figure they're natural and organic and packaged in foil instead of BPA leaching plastic, so they can stay.

But, I'm baking up graham crackers tomorrow to kick off our plan, and this week I'll be making ketchup, hamburger buns, bread and granola bars to make sure our house still has some convenience foods that we love the ease of.

Oh, and I'm also trying to do this on $100 a week.  We have a low grocery costs here and no food tax, so this is possible but difficult.

I'd like to promise that I'll blog every day during this experiment, but I'm afraid I'll make myself a liar before we begin, so I will say that I promise to keep you updated.