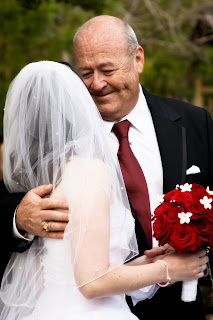 Father's Day in my house growing up was the stereotypical celebration in honor of our patriarch. There were homemade coupons promising ONE FREE CAR WASH, and GOOD FOR ONE ROOM CLEANING, there were horrible neckties, and there were the hushed voices of children doing their best to play quieter than normal because today Dad deserved an uninterrupted nap.

When my parents were finally able to have me, after struggling a bit like Corey and I have, they struck a deal. They knew that they wanted my mom to stay home because they were both from families where the mom was a housewife (as most were at that time) and they felt that the interaction was imperative to development. In a time where women were becoming decidedly more independent and accomplished, this meant bucking the trend of two income-ness and embracing the past "Leave it to Beaver" style of life.

At five years old, I didn't understand this compromise. I understood that sometimes my Dad was on business trips and couldn't make it to recitals. I understood that he would come home after a fourteen hour workday and not want to have a tea party. I also understood that "Wait until your Dad gets home" was not meant to draw me into a comfortable remembrance of the last time my Daddy and I played with dolls. It was meant to scare the crap out of me.

As I grew up, it slowly dawned on me that my mom was the classroom mom, the unofficial cheer coach, and the lady at EVERY practice, concert, trip, game, play, and recital BECAUSE my dad was at work, not in spite of it. Even when I probably would have chosen to have her around less (that's what the teenage years do to you, after all) the light bulb started to flicker when I realized that other people's moms were at work. And while my mom deserves tons of credit in this area, my Dad is also the unsung hero of my developing life.

He was appreciative of his ties and coupons (although I think he appreciated the naps exponentially more) and never complained that my mom got to be the one in the middle of everything. I'm sure he was secretly thankful to not be on the receiving end of pubescent breakdowns and boy talks, but I think he was also quietly mournful at missing afternoon track meets and evening driving lessons.

I don't think I understood completely though, until our wedding. My mom had the idea that both of them should walk me down the aisle to give me away. I was fine with it, but my Dad put his foot down. HE was my father, and HE would be giving me away. Although my mom was a bit hurt, it was perhaps the first time I witnessed his refusal to share the role he had stepped into 28 years ago. As he escorted me down our aisle in the rain, I saw in his eyes not only the pride of a father but the unmistakable knowledge that those years had simply flown by without his permission or awareness. The sacrifices he made were necessary to them, appreciated by me, but no less painful because of that knowledge. It was a hard compromise for him to make, and he did so without letting any of us know how difficult it was.

I understand now Dad, and I appreciate every fourteen hour day.

For these reasons and more, I simply cannot wait to have children and witness my Dad's transformation from martyr to grandfather. I'm certain he will stuff their pockets with candies, bandage their cuts as if they had taken shrapnel from a wayward air strike, and make mud pies for hours in the backyard, just as my Papa did with me.

And if it is possible, he will enjoy being a Grandpa even more than he did being a Dad (that is my hope anyway). I just hope they still make Daffy Duck neckties.

Happy Father's Day to my Dad and to each father who has made sacrifices, noticed and unnoticed, so that their children may have the lives he envisioned for them.
Posted by Christina at 10:01 PM 1 comment: 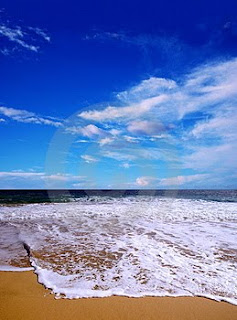 Someday I want to live near the beach. I want to have babies that wake me up and tell me that they want to go play in the water, so we will pack up baskets and tote bags and start the barefoot walk down cobbled streets and sandy boardwalks, and set up umbrellas to lounge in the warm air.

I want to have backyard barbecues with dozens of friends, and tiki torches that stay lit late into the night, and hear the whispers of children who are supposed to be asleep but who just can't drift off because the excitement of life has them too full of energy.

I have no idea where in the world this beach is located, or how many years into the future this glimpse is, but I dream about it like it has already happened. I can taste cold, drippy watermelon on the back porch, and hear birds chirping through open windows in the spring.

In reality, summer has hit. The Sprocket and I bid Daddy farewell in the mornings and then watch the world get toasted outside our back windows. He sticks his head out the dog door to survey the world, only to draw it back in when he discovers that the sun singes his mass of black fur. He retreats to the bedroom to nap again, hoping that when he wakes it will be eighty degrees and he can go outside in peace. We need to take him up the mountain to visit his Grandparents so he can run amok (his favorite activity) without burning his little paws.

In honor of summer, the boy and I must go buy a king sized bed. These two things sound completely unrelated, but when you feel like nothing in the world can make you any hotter and you lie down on crisp, cool sheets to relax, touching someone else's hot leg can put a serious crimp in your style. Sometimes the boy and I will accidentally touch in the middle of the night, and you would think that one of us is electrically charged by the way that each of us jump away in pain. We originally wanted to try and hold out until we moved, but the universe has plans to keep us in our current house a little longer than we originally thought, so it appears we will have to move a new bed in before moving out.

And in housing news, there is none. We put one offer on a place we liked, but quickly got into a bidding war and were out-auctioned by someone with cash. We haven't found much else that we LOVE, so we're going to keep looking and start to include short sales in our hunts because that is what at least 90% of the listings in our area are. I feel terribly guilty looking at beautiful homes still occupied by their original owners when I know that they paid $400,000 for their house and are now selling it for one third of that.

I would hate to be them, but I'd also hate to stay in this rental for one day longer than I have to, so onward we go...
Posted by Christina at 10:22 AM 4 comments:

I know it has been a while, and I will update soon. In the meantime, I saw this video and found it very moving so I thought I would share it with anyone who might stumble upon my blog. Sometimes we forget that everyone has struggles that we may not have any idea about. Although I've been semi-vocal about our problems with infertility, there are many couples who don't share the pain they're going through.

What IF? A Portrait of Infertility from Keiko Zoll on Vimeo.

Posted by Christina at 5:02 PM No comments: