So tomorrow is the big day for my exploratory surgery. I would be more nervous if I hadn't just had surgery a couple months ago because now I know how I react to the anesthesia (I like it!!!).

The problem? Well, yesterday afternoon my throat felt a little scratchy and by midnight I had a completely raw throat and stuffy nose. But no fever so I thought I may be okay. I went to the hospital for my pre-op blood tests and asked the nurse, and she said to just go ahead and take some cold medicine. This sounded suspicious to me since the last time I had surgery they monitored my pre-operative meds pretty closely so I decided to call my surgeon. Good thing. She said I could take Tylenol cold and Chloraseptic but nothing with aspirin. Makes sense right?

So I raid the Walgreen's shelves for Airborne, Chloraseptic, some yucky blue Tylenol liquid and cough drops. And then I check my temperature again: 99.2 . This wouldn't be that bad except my normal basal temperature is around 97 so I know something is going on in there.

So, please cross your fingers that whatever germs I have get massacred by the onslaught of cold medicines. I know they can't do surgery if I get up in the morning with a fever and I DO NOT want to drag this surgery out any longer than it has been. And if I do go in, here's to hoping they get the stupid thing out and it's benign.

Thanks for all the good thoughts!!
Posted by Christina at 10:58 AM No comments:

Isn't is ironic how once you get a career that offers you a lot of vacation time, you have too many responsibilities to actually use it?

With my work anniversary falling in August I was about to lose all but 80 hours of my accrued vacation time, so we decided to take a few extra days in California after my Nana's memorial service.

The service itself was fine. It was a Catholic memorial, like she'd wanted, and it was so touching to see some of her lifelong friends come out - although none of them were in good health at the age of 80+. The older I get, the more interested I am in listening to these people talk about the good old days. I find the war stories especially fascinating. I learned that after the bombing at Pearl Harbor, some of the wives and families of soldiers had to wait over six weeks to hear status of their loved ones. I can't imagine waiting six minutes, let alone six weeks. My Papa retired from the Navy and it's heartbreaking for me to think about the things he gave up to defend our country - births, birthdays, first days of school. I don't know if I could willingly make such a sacrifice.

But, with this being Corey's first trip to California I couldn't let it end with him just seeing all of downtown smoggy Riverside, so we headed down to Laguna Beach and then on to San Diego. 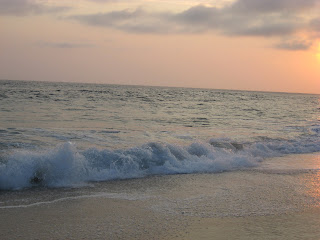 It was amazing to watch the sunset on the beach with our shoes in our hands and our jeans rolled up, but mostly I savor the sounds. It's so calm and peaceful listening to the waves roll in - I feel like I could pitch a tent on the sand and never miss modern conveniences.

But, I will say that our hotel room ON the beach was a nice respite. We stayed on Coronado island on base (the military does have its perks) and we literally walked out of our hotel room onto the beach.

If I hadn't been so excited about seeing the penguins at Sea World I would have wanted to stay there for weeks! 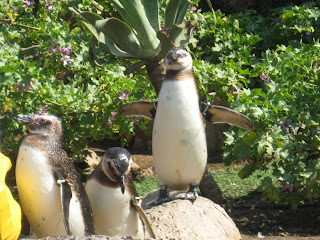 I have been to Sea World several times, but the last time was many years ago. I was sure we'd have a good time, but I think I underestimated how much fun we would really have.

It was fantastic! Besides just the penguin exhibit (which I dragged Corey into twice) there were amazing dolphin and whale shows, and a fireworks show to end the evening that was absolutely perfect. If I could go again tomorrow I'm sure I'd enjoy it just as much!

Alas, we had to come back and, well, you can see how exciting that was by reading my last entry.

Now I just need to come up with a reason to use my other 160 hours of vacation!
Posted by Christina at 11:24 AM No comments:

Sorry I've been lagging with posts - the boy and I took a trip to California for my Grandma's memorial, and then we took a few days off to relax. Once I remember to download the pictures I'll write all about San Diego and our lovely trip to Sea World.

To bring our vacation abruptly to an end though, we had to come home to the wonderful insect-infested desert. I used to think that bugs only invaded dirty homes. As long as I vacuumed and didn't leave food on the floor I thought I was safe. And then I moved into a house that had a little backyard and I learned otherwise. They are everywhere!! Ants, Roaches, Spiders, Earwigs - and my new sworn enemy: the scorpion.

My first sighting was when we first moved into our house and it crawled out of the duct work on the 12 foot vaulted ceiling. Luckily, the boy is smart and he defeated it with a shower rod. My second interaction was a bit more horrific as this one decided to join me in the shower. Screaming and covered in shampoo, I streaked out of the walk-in shower and down the hall shouting at Corey to rescue me. By the time I regained my composure and washed the Redken out of my eyes the monster was smooshed with a shoe and flushed.

When we got back from vacation I was nervous to walk into the house as I figured the bugs had taken over, but I was pleasantly surprised to see my home exactly as we'd left it. Little did I know those little bastards just hid well. I almost stepped on #3 with bare feet in the kitchen and noticed with great trepidation that it appeared to be a baby before the boy dispatched it with a Nike. "Baby scorpion means there's a mama scorpion," I whined from my perch atop the dining room table.

Whatever. The boy is a liar because #4 (Big Momma) and I met this morning when I was all alone in the house after the boy left for work. I was walking around getting things together when my bad eyesight revealed something suspicious on the wall in the hallway. Blinking and rubbing my bleary eyes, it appeared to move enough to send me screaming into the living room. After putting on boots (that I shook out profusely before donning) and arming myself with a broom I ventured past it to the bedroom, grabbed my glasses, and once again peered around the corner. Sure enough, the demon was perched on the baseboard taunting me with it's huge talon of a tail. It must have been 6 inches across (or so) and a good half-pound. 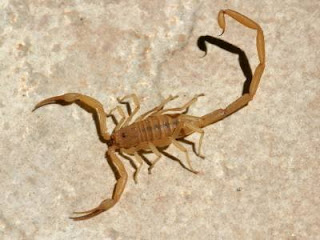 I shrieked and ran back into the bedroom, contemplating my options: a) call Corey and demand he turn around and drive home for an emergency rescue, b) throw a huge box on top of it with a note telling him to kill what's inside when he gets home, c) leave the house, pretending I hadn't seen it, and never come back, or d) suck it up and deal with it myself. Briefly, option e entered my mind, but I thought that firing a 9mm several times in to the floor might cause damages and police presence.

Then I realized that if Corey ever gives in and we have kids I'm going to have to protect them from evil like this. So, I retreat to the bedroom (stopping several times to pop my head around the corner and make sure it's still there) and put on my scorpion-killing uniform: snowboard pants, a men's sweatshirt, Air Force gloves, and knee-high leather boots. No skin from the neck down is showing and this makes me feel safer. I grab the boy's boot, and holding it from the very top, I tiptoe around the corner into the hallway. The monster is still there, pointing its tail at me viciously and making what I can only assume is a battle cry of weird hissing sounds. We play this little game for about 20 minutes where I get close enough to hit it, and then run away screaming. It doesn't get tired though, and is waiting for me every time I come back around the corner. Finally, in a moment of adrenaline-rushing bravery, I attack it with the boot yelling something like, "Ahhhh, die scorpion, Ahhhhhh, Ohmygod, die, die, die." I hit it so many times that the pieces blended in with our brown carpet. Then, I placed the boot on top of its body and ran into the bedroom to stand on the bed until my heart rate returned to something healthy.

I am now a warrior.

Single Barrel Whiskey and a Straw... 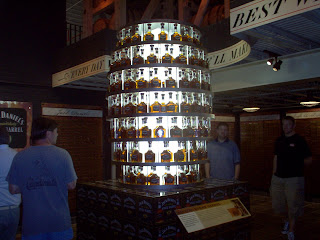 Last year the boy and I toured the Jack Daniel's distillery when we were in Tennessee. Even though I can't drink anymore because of my bladder disease I can still almost taste the air in the room above - the single barrel room. It's heavenly, really. Even if you're not a huge fan of whiskey you can appreciate the amount of work that went into this one little barrel of liquid pleasure. And right now I wish I could drink a whole bottle.

If you'll remember back to not so long ago, Corey was having a little bit of belly trouble. Well, today (a week after taking the tests) we finally know what's wrong. The overachiever that he is, he managed to grow a ginormous gallstone in his teeny tiny little gall bladder and it's wrecking the program. Hello surgery.

And yesterday, because I also cannot ever make things simple, I found a new doctor. A doctor that felt around and announced, "You have a lump. I've never found one there before." I also enjoy exceeding expectations, but stumping a surgeon is beyond even my wildest dreams. Hello surgery.

So, very soon the boy and I will be having matching laparoscopic surgeries to remove various items from our bodies. I will be asking for my appendix and gall bladder to be ripped out as well - just to avoid it in the future.

We will also be entering a karmic retribution 12-step program to try and get the universe back on our side. Step 1: If we have ever hurt your feelings, cut you off in traffic, laughed at your hideous outfit (that's just me, not Corey), or had a hotel room above you in Vegas we are unequivocally sorry. It will never happen again as we are becoming Buddhist, homeopathic, carbon footprint reducing Kabbalah lovers and we implore you to forgive us in whatever language and religion you feel obligated to.