So I haven't been feeling so hot lately. Nothing major, just the longest lasting cruise-induced stomach bug in the history of the world (that the boy also contracted but seems to have recovered from already).

B.C. (Before Cruise) my days consisted of laundry, sweeping, vacuuming, playing with the Beagador, doing dishes, cleaning bathrooms...etc. A.D. (After Debarkation) my days consist of lying in bed, moaning, sipping ginger ale, and maybe doing a load of laundry so my poor husband won't have to choose between doing his own midnight laundry and wearing a dirty shirt to work, again.

Then today, I stumbled upon this blog, which I generally read every day but had let slide since we got back.

I know that at least half of the world reads Nie's blog, but she has this unique ability that I always find good pastors have at church: they make you feel like they're talking just to you. Every word out of their mouth is something that God knew you needed to hear, and they say it gently, sometimes in a whisper or in silence. Even if they're telling you that you need to do better, or that you've been making mistakes, you still feel like the message is a sweet gift and you welcome it wholeheartedly without defense or anger.

Today she showed me that life sometimes sucks to one degree or another, but we have to get up, smile, and power on. I have not experienced her degree of suffering even in my darkest nightmares, and yet she's ironing clothes in her beautiful dress, probably humming to herself in perfect harmony while marinara from scratch bubbles away on the stove.

So today, while the boy is out watching the remake of "Nightmare on Elm Street" (I wisely opted out), I will tackle the three loads of laundry that need to be folded, the kitchen that looks like we live in tornado alley, and maybe even a few of the weeds that time forgot in the backyard. 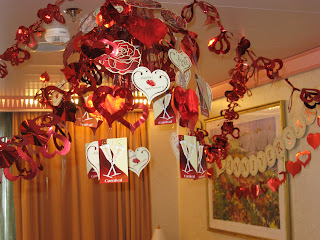 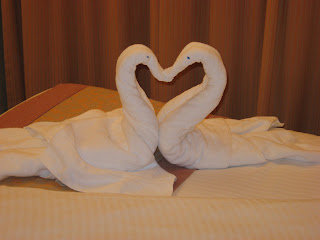 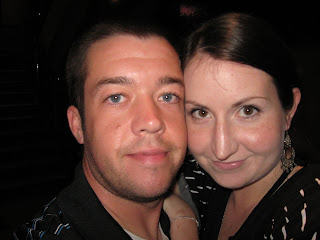 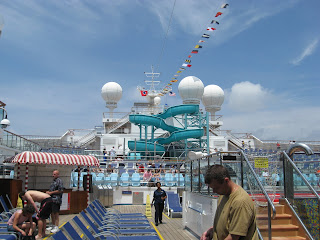 Before my old age completely fades my memory I need to post about our amazing Caribbean vacation. It's unbelievable how the time beforehand and since then has crawled by, but the vacation itself went at the speed of light.

The most nerve wracking part of our trip was the plane ride to Miami, as my darling husband had a seizure on the first plane ride we ever took together, and since then I spend our jet time checking his chest for breathing and making sure he still has a pulse. I'm sure I look like a crazy woman staring at her husband intently while he sleeps, but I don't care.

Luckily, we arrived at the abominable Miami International Airport (never, ever again will we fly to MIA) without incident, and our luggage even arrived too. We took a short cab ride to the Hyatt Regency (not at nice as it should have been for a four star) and then met up with Corey's friends for dinner at a Brazilian steakhouse. We had an amazing time with them, and I was a little sad we hadn't booked an extra day or two to spend before we left on the cruise.

I won't waste time talking about embarkation as it was uneventful, and by noon we were onboard and the boy was enjoying his first of many, many trips to the 24-hour pizzeria.

I need to break our ports into a completely different post because there is no way I'm writing a twelve page narrative right now, but suffice it to say that the stops were the best part of our trip. It amazes me that there are people who go on cruise ships and never get off the boat at the stops, as the ability to travel to four countries in a week is what sold us in the first place, but there were many passengers that did so.

We did enjoy a few shows, a comedian, a juggler, and the drive-in sized movie screen mid-deck that showed movies at night. As a foodie, I was sure I would be disappointed in the cuisine, but it was rare that I didn't think dinner was delicious. Buffets are never my favorite, but I will say that to cook for 3,400 people at once must be quite an undertaking and the few times we partook in the buffet were satisfactory.

We didn't have any complaints with Carnival at all, and thought the service we received from everyone was remarkable. Our room was immaculate every day, and they did a wonderful job decorating our cabin as an anniversary present from my parents. I wish we could have brought our cabin steward home with us, as the boy loved the towel animals waiting for us every night.

One problem we did have revolved around our choice in cabins. When we booked there were few balcony cabins left, so we chose one mid-ship on the sixth floor. Unfortunately, the fifth floor was the activities floor and we had a room directly over the disco, piano bar, and nightclub. These rooms should definitely be flagged for excessive noise, because cruise ship entertainment does not abide by the time constraints of land, and we didn't get sweet relief from the pounding bass until after 4am some nights. Since I am old and like to sleep during vacation, this was a real problem, particularly since we reached each port around 8am. Unfortunately, this lack of sleep caused us to miss our cave tubing excursion in Belize which we were both incredibly excited for.

Fortunately for us, and unfortunately for someone else, a couple had to leave the cruise early for reasons that were never made clear to us, and my husband looked sweet enough complaining that they moved us to the blissfully quiet tenth floor halfway through our trip. It was a bit rougher being that far up on the ship, but I enjoyed my sleep after that and we were very grateful for the reprieve. We heard complaints from many other people near our original room, so I know that we were very lucky to get moved. My advice would be to avoid any and all rooms above or below a noisy area on a ship - sounds like common sense, but we figured that we would be up until late anyway so it would be fine. Unless you can sleep in what sounds like the stage area of a rock concert, these rooms are not for you.

If you cruise at all you are probably aware of the stigma that Carnival has as the Walmart of cruising, and we were very nervous because of this, but also wanted to avoid the pretentiousness of Celebrity and the crappy ports of call that Princess offered, so we took our chances. I will say that we had absolutely no reason to complain about Carnival, but we did find that the population aboard a Carnival ship reminded us of what we would see at Walmart. There were a LOT of obese people, wearing inappropriate clothing, doing their best to eat their fare's worth from the buffet...often. There were a lot of drunk, rude people bumping into you, cutting in lines, smoking where it wasn't allowed, and treating the staff like they were second class humans. There were people throwing trash on the ground, dropping tongs from the buffet and putting them back in the food, and letting their children run around the ship completely unchaperoned. I know that this is basically a cross section of what America has become, but our vacation definitely would have been better if people had required themselves to maintain any amount of decency.

I'm not sure that more money ever equals more manners, but I think next time we will try a different cruise line and hope that the air of pretentiousness scares away some of the classlessness that we experienced from fellow travelers. I understand that people want to let loose on their vacation, but it is never appropriate to be rude, no matter how entitled you think you are. The carnival employees worked very hard, and I felt awful for the room steward who had to clean up trashed cabins every day and the waiter who had to bring our table mates four different appetizers and three entrees per person.

All in all, we had a wonderful time and wish it hadn't flown by so quickly. I was actually able to go with the flow a bit more than normal, which turned out to be a real benefit because micro-managing a vacation like this wouldn't have been possible even if I'd tried.

I appreciate my husband working so hard every day to allow us to go on trips like this, and we can't wait for the next one!
Posted by Christina at 10:36 AM 1 comment: