The cone of silence

If I said that I haven't blogged often because I have a newborn, most of you would understand. If I mentioned that said newborn has colic, all of you would understand. And although I am busy tending to her needs 99% of the time, I have also been avoiding blogging because there is one particular thing on my mind and I want to be very careful how I write about it, because as we all know: once something is on the Internet, it is always there.

At this point we don't know if she's profoundly deaf or if she just has moderate hearing loss. We don't know if it is conductive or sensorineural, neither of which mean a whole lot to people who don't have hearing problems. But, the fact remains that we have taken seven hearing tests and she has failed all seven. She has been seen by an audiology tech, a pediatrician, a otolaryngologist, and finally an audiologist, and all of them gently place probes in her tiny ears, press some buttons, and look at us with a soft smile and shake of their heads.

When she first failed her newborn screening in the hospital we were sure it was just residual fluid in her ears due to the fact that I was only pushing for a few minutes. When she failed again the next day we were a touch more concerned, but thought that the fluid must just need a little more time to dry up. By the time she failed numbers three through seven we progressed to somewhere between horrified and quiet acceptance, and that is where I remain.

The pediatrician says that she is healthy. She was never jaundiced despite exclusive breastfeeding, she is gaining weight like a champ, and there is absolutely no way that anything is wrong with her very powerful lungs. But the fact remains that my little girl may never hear me tell her that I love her and that breaks my heart.

We are hopeful that no matter what the extent of her hearing damage that there will be at least something to work with - even if she has as little as ten percent hearing capabilities they can amplify it with hearing aids and she may be a candidate for cochlear implants later in life. And hearing aids have progressed far beyond the huge, tan-colored appendages that we all used to see on our grandpas. They can even fit them on a child as young as one month old.

But despite the hope that I have been given through my late-night research, I still can't help but cry thinking about the possible hardships my baby will have to go through. Will she learn to speak the same time as other babies? Will she learn to speak at all? Will she get teased in school, or will she have to go to a special school for deaf children? Will she ever hear the lullabies I sing softly to her despite knowing that she probably can't hear me? And will she be able to dance to the first song at her wedding?

I wonder what I may have done (or not done) during my pregnancy to result in her hearing loss. We have no family history, and I had no infections during her incubation time, so did I forget to take my prenatal vitamin on the day her ear canals were forming? Did I listen to music too loudly in the car on the way to obstetrical appointments? Did I not pray enough? And why are the babies born to the idiots on "Sixteen and Pregnant" just fine and my poor baby has to suffer? It is easy to tell other people that God isn't vengeful and He does not punish until you are in a situation where you feel that He is punishing someone you love for something that you did. Or maybe He just doesn't care.

I am so thankful that my husband is here with me to go through the same thing I am and although our emotional journey isn't exactly the same he is the only person that knows exactly what I am feeling when I look at our little miracle. He reassures me when I need it, and holds me at three in the morning when I am crying even though he has to get up for work in two hours and she has already kept us up half the night.

I would gladly give my eyes, ears, hands and legs to save Brooke from suffering for one minute from this condition but unfortunately there is no bartering system for God or the senses. All I can do at this point is wait, research, and continue to sing Twinkle Twinkle Little Star at night in her glider while the optimist inside me defies her not to hear it.
Posted by Christina at 11:49 AM 3 comments: 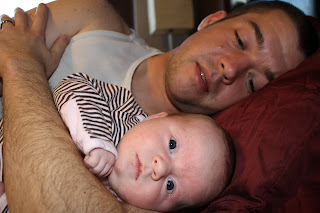 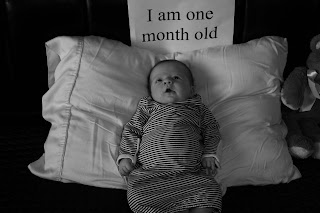 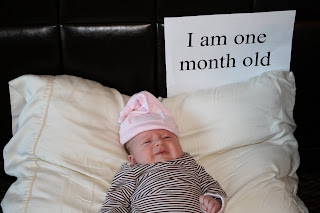 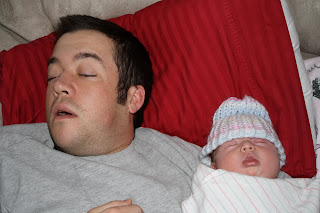 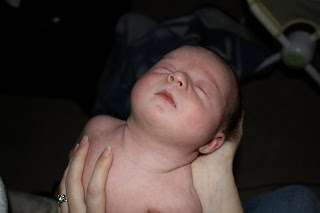 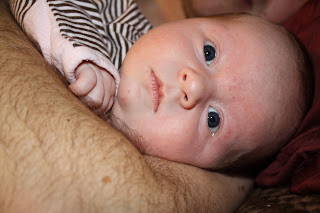 Month one is hard! People don't tell you it's hard because they want to seem tough, or they don't want to complain, or maybe just because their babies are sweet and quiet. I'm not sure the reason, but we spent so much time and energy focusing on getting pregnant and staying pregnant that we thought the easy part would come when she actually got here safely. How wrong we were!

Brooke was an angel for the first two weeks. She rarely cried, and only then when she needed to be changed or held for a minute. At two weeks she started showing us how impressive her lung functions are and began screaming for hours at a time. I had no idea that babies did this, and I thought something was horribly wrong with her. After some convincing from Corey, my mom, nurses we know, and the pediatrician I resigned myself to the fact that we were the lucky 1 in 5 who gets experience with Colic.

The past few days have been a little better due to some changes in breastfeeding tactics (I make more milk than the little thing can handle, which makes me feel like an upright dairy cow) and the fact that gripe water helps her tiny belly get rid of some gas, but the past few weeks have been rough. So rough, in fact, that her daddy has declared her to be an only child already.

She has started making new noises to add to her collection of barnyard sounds, and I swear that every now and then her smile is more than gas. She still hates baths, but she loves being wrapped up in her hooded towel afterwards. She doesn't like bottles or pacifiers, which means that I am on duty 24-7, but since we are absolutely dedicated to breastfeeding that is better than the alternative. By her two week appointment she had gained one full pound and nine ounces from her going-home weight, and she's now around ten pounds according to our home scale. I still have ten pounds to go to get back to pre-baby weight, but unfortunately it is easier to put weight on a baby than it is to take weight off a mom.

She is a good sleeper at night and comes down from her evening colic episode around 7pm and sleeps the rest of the evening with breaks to eat. Like clockwork every morning between 5 and 6 she starts making horrible grunting noises that sound as if she's perfecting a sea lioness mating call so we are awake from then on, but I am still thankful for the 2.5 hours of sleep at a time.

She lives in the Ergo carrier, which is my favorite thing on earth right now when I can't get her to calm down, and naps in her Rock N Play sleeper downstairs. She loves her daddy and his voice and she hates her carseat and cloth diapers. We are still committed to the cloth diaper cause, but it has not been as easy as we'd hoped due to the fact that she eats a billion times a day and therefore pees and poops more than a normal baby. At one point we went through six cloth diapers in a four hour span, so we're still experimenting with them.

I wish there was more to write, but honestly she's just a big lump right now. Albeit an adorable, blue-eyed, angel faced lump, but a lump nonetheless. Although we have been warned against it, we are looking forward to the time where she can tell us what is wrong with her.

And, just so no one accuses me of being one of those people that can't talk about anything but her baby we did do something else exciting this week: we booked a cruise. During one of Brooke's freak-outs Corey happened to get an email about cruise deals. He generally asks me about twice a week if we can go on another cruise, but he must have been determined this time because he actually started asking me with dates in mind. I didn't have the heart to tell him no because I honestly thought he might jump off of a bridge at that point in time, so I relented. We are now going on a belated anniversary cruise in May of 2012 to Nassau, Bahamas, St. Thomas, and St. Maarten. Our great friends Brandon and Kim are going with us for their first trip away from their son so I know that we are all going to have a blast. And this way we have something to look forward to on nights where the girl gets all situated for bed and then craps all over us while we're singing her a nighttime lullaby (just a little anecdote about last night).

And finally, some pictures. As soon as she is in better spirits we will have some professional ones done.
Posted by Christina at 8:33 AM 1 comment: