There is no time for a real post because (like always) I'm running behind on my to-do list, but I did feel the need to write about some awesome news we received today: Brooke's EKG came back normal!

Hearing loss can sometimes come as part of a syndrome that affects multiple systems including eyes, heart and brain. We still have an opthamology appointment, a brain MRI, and a genetics testing appointment, but her heart is off to a good start and doesn't seem to be impaired in any way!

Also, it is worth noting that Dr. Marc Boggy at Luke Air Force Base is the best pediatrician I can imagine having. Yes, those are too many details for most of you, but in the off chance that my blog comes up when someone is googling his name for reviews I wanted to make sure that everyone knows he is amazing!
Posted by Christina at 2:39 PM 2 comments: 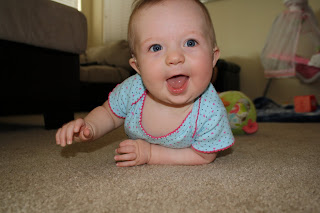 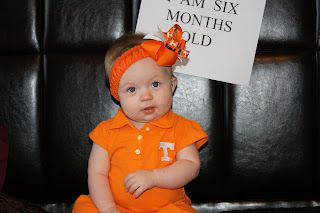 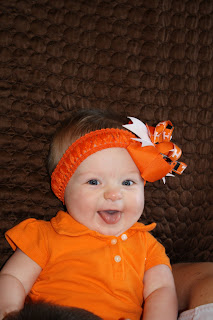 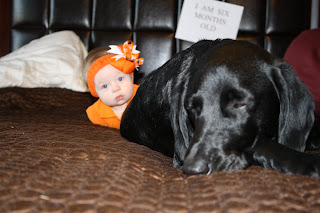 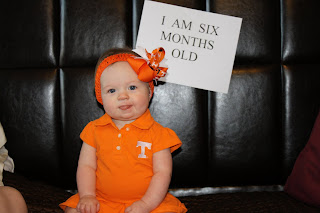 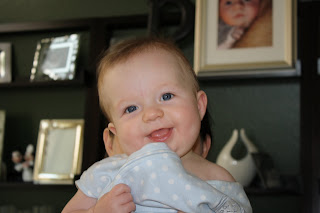 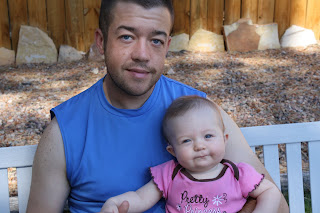 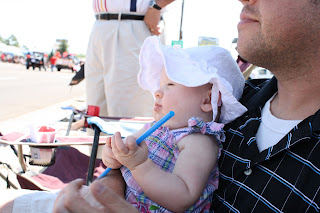 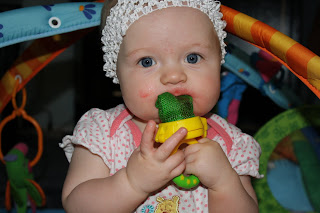 There is constantly a song playing in my head. Sometimes it is something I heard on the radio, a special ringtone from my phone, or recently it is a tune Brooke's magic singing kitchen plays because I hear it roughly 230 times a day. But almost always the background music to my life is the little ditty that the white rabbit in "Alice in Wonderland" mutters: "I'm late...I'm late...for a very important date..."

Although normally it's not something uniquely important I'm rushing off to do, unless you consider making beds and folding laundry important. However, I can't help but rush about in a semi-state of panic that I'm just too far behind.

Case in point: Brooke's month six post. Brooke naps for EXACTLY thirty minutes in length, four times a day. That means that four times a day I sit down and figure that THIS time I will write her blog. And then I glance down at my to-do list and realize that I need to make an appointment with a pediatric opthamologist, research hearing aid accessories, order more baby wipes, and look up the recipe for organic baby banana oatmeal. As soon as I get those done I start to type in our blog address and I hear the familiar cries echoing through the monitor. Once in a blue moon I check the video portion and she simply looks around, rolls over, and goes back to sleep, so each time I hear her squeals I cross my fingers, say a quick prayer and hope that when I see her she is in the process of resuming her nap. But, each time lately she is staring straight into the camera threatening that if I don't get upstairs in 8.2 seconds flat she is going to let out a wail the likes of which I haven't heard before. We have repeated this pattern at least a dozen times in the past two weeks.

So, I am late, but here goes anyway:

Brooke is six months old. She weighs 16 pounds and one ounce (65th percentile), is 26 inches long (74th percentile) and her head is somewhere in the mid-sixtieth percentile too, but I can't remember the exact measurement. Essentially, the kid is still big, but not quite as ogre big as she was before. My family is reasonably tall so we're hoping she got some of their height genes, but it's not very likely considering the fact that God took Corey and made him a tiny girl twin to come up with Brooke. Every morning I scoop her up from her crib and look right into his eyes and grin right back at his smile. It is uncanny!

She sits up like she's been doing it for years, and now she army crawls all over the house at approximately 200 miles per hour. She attempts to regular crawl, but it ends up with face plants so she resumes her belly dragging since it gets her everywhere she wants to go anyway. And where she wants to go is towards anything electric, sharp, poisonous or just simply not allowed. Her own personal toy department has been cast aside hundreds of times in favor of the entertainment center, the dog bone, or the electric sockets in various locations. Don't worry - childproofing is in full effect, and she's not left alone EVER so she hasn't hurt herself, but I'm afraid Sprocket is going to coax her into his water dish if she doesn't start leaving his stuff alone.

We spent her half-birthday in Pinetop as is our usual fourth of July tradition. Although this year was sans fireworks because the entire mountain was burning down, we still had a lovely time at the parade and then just enjoying the fact that we weren't at home in the 118 degree heat.

Shortly after arriving home from that trip we headed back to San Diego for the second time in as many months to celebrate my best friend's wedding. She did remarkably well during the day on both trips, but sleeping in a strange environment is not my girl's cup of tea and all progress we made with sleep training went out the window.

Which leads me to thanking the anonymous commenter last month who suggested we check out a certain sleep training website/message board that did prove to be helpful. Although our trips seriously screwed things up, there was a point in time where Brooke slept eight hours straight before needing to get up to eat! We are hovering right around five hours (followed by three and three more) of sleep for her currently, so it is an improvement from last month.

Rice cereal results in a three day drought and then a massive diaper buster blowout, so we have forgone that option in favor of tummy-friendlier oatmeal, and she has now eaten apples, peaches, peas, green beans, squash and sweet potatoes. Because she is a fat girl, all of these options appeal to her and we have yet to run into any problems with her not eating a certain food.

Her belly is still quite finicky though, and I am still unable to eat any dairy without Brooke's gassiness trying to rival her Daddys and her colic-type crying returning. I hope that this does not mean she will be lactose intolerant later in life, but my research tells me that most babies grow out of this so I am hopeful that she will too.

Her doctor says that she is advanced in all ways, except for speaking issues which are obvious in cause. But, she now turns towards all sounds and we're pretty sure she recognizes her name (and recognizes the word NO since she tunes it out so well) so we are happy with her progress. We still have yet to see consistent consonant sounds, but we're doing all of our exercises so she'll catch up sooner or later.

And last, but not least, the little munchkin popped her first tooth through last week while chomping on the leather strap of my purse. I cringed that in all of my efforts to keep her environment green and organic she decided to latch onto a piece of chemically treated cow hide and munch on it with vigor, but she left me little choice so I figured that babies have survived through worse. I'm hoping the rest of her teeth are to follow shortly because she has been moodier than normal lately, but I have yet to resort to procuring her a belt or another handbag to nom. Hopefully nature will run its course.

And hopefully that voice inside my head will help me to become more efficient and I will manage to update again before seven months hits!
Posted by Christina at 11:05 AM 2 comments: