Getting older every day... 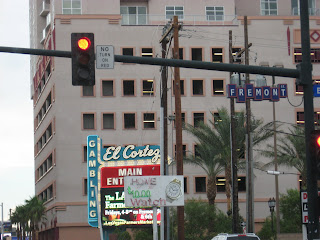 Last week was the boy's thirtieth birthday. I'll let that sink in a moment.

I remember back in the day, while playing with barbie dolls and EZ bake ovens, thinking that surely when I was thirty I would have the whole world figured out. There would be no stress, no complications, no hard decisions. Knowledge is power, and certainly by thirty I would know everything there is to know. Also, I figured that the beginning stages of Alzheimer's and arthritis would be setting in because, damn, thirty is old!!

He didn't seem to feel much older, or to be bothered by the milestone, so we headed up to celebrate with dear friends in Las Vegas.

Brandon and Kim have been good friends of Corey's for years now, and upon meeting them I immediately felt that I'd known them forever as well. I know that I can be a bit standoffish towards new people and I have high standards for friends, but to know these two is to love them so we are sure to have a good time when we see them.

Quietly, I was hoping that we wouldn't need a repeat performance of last year which involved copious amounts of whiskey and beer (on the boy's part, not mine) and sitting at the blackjack tables until dawn, but I was prepared to honor Corey's birthday wishes whatever they involved.

Thankfully, his age must have kicked in somewhere during the last year and we enjoyed the weekend without much debauchery. We played with Chase (the world's cutest baby), went shopping, played (and watched in my case) enough Tiger Wood's golf to qualify for some kind of Playstation tournament, and ate at Hubert Keller's burger restaurant to celebrate. We did hit the tables for a while on Saturday night, and then ventured to seedy Fremont street on our way out of town to play some roulette, but all in all the gambling was a secondary point in the trip.

When we got home to celebrate his actual birthday my parents showed me up by buying the boy a new driver that he'd been lusting after since seeing it featured in last month's golf digest, but he also got a new golf bag, some golf clothes, a sand wedge...notice a theme?

I think he enjoyed himself, and I know that he handled the milestone much better than I will in a few years!
Posted by Christina at 1:54 PM 1 comment:

I don't have anything particularly interesting to post, but I hate the idea of having a blog and letting it sit idle 90% of the time. Most people I know understand that my life (and most others) is a series of monotonous events punctuated by the occasional excitement - so don't begrudge me a boring post now and then.

We are moved into our new place and even though we still have the small annoyance that we're renting, we are in love with it. The owners are considering selling, so there is a small chance we'll purchase it in a year, but if not I will enjoy cooking in my enormous new kitchen for the next 11 1/2 months. It truly is wonderful to have sunlight and space and GRASS, none of which we had at our previous residence. I have also yet to hear and see the ghetto bird circling my backyard with its spotlight beaming, so that is an additional plus.

This is the boy's last week in the job he's been doing for the past nine plus years and I know he's a bit melancholy about it. Ten years ago he was just a small town boy who wanted more out of life and thought it would be cool to work on F-16s. Now he's in the middle of a promising career and will be training the future crew chiefs of the air force and making a difference in their lives just like his instructors did for him. I know he'll be amazing at it and this is just another step to getting where he wants to go in the military, but I am definitely going to miss him for five weeks while he goes to instructor training in Texas!

We are taking baby steps towards finding a real medical diagnosis for what's going on with me, and I'm happy to be going in the right direction. The tests aren't generally fun, but I feel like I have doctors that are listening to me and taking my concerns seriously, which is a welcome relief. It appears that I may well have a systemic pain problem, but these are quite hard to diagnose correctly and I am not intersted in a doctor labeling me just to get me out of his office and medicated, so it is involving quite a lot of research and questions and requests on my part. I'm hoping that if I do in fact have the problem that they think I might, that I am able to be definitively diagnosed by a specialist and we can move on to treatment. What a thought!

If I could think of anything else remotely resembling intersting information I would write it, but this is where the monotonous part comes in. Sometimes the day to day stuff is nice though right? It could always be much worse...
Posted by Christina at 12:27 PM 1 comment: