The scalpel and the stone

I know you'll all be disappointed, but there are no pictures of the infamous gall stone. The hospital had to send it off to pathology so we didn't get to take it home in my purse and therefore, we didn't win the gall stone size prize (whatever that may be).

The boy did survive, and after a very very long 45 minutes the surgeon said that everything went fine and he was already done. I had to wait another twenty to go back and see him because apparently he was flirting* and trying to talk his post-op nurse into getting him a beer. As far as I'm aware he didn't get a Bud Light or a phone number so I think he's forgiven, but it's still funny to watch people all hopped up on Demerol.

He's still very sore, but there's good news: The Air Force is much more lenient than the civilian world and he has another two weeks to recover. I foresee many long days of Legend of Zelda and Super Mario Bros 2 in his future (we just got an original Nintendo).

So, we spent the past four days lounging around, watching movies and planning shopping trips. I've become very adept at this CVSing thing and the boy has even joined in. Between the two of us we've got more Robitussin and Arnicare than we could use in a million years. But here is another very cool aspect of smart shopping: we found a great battered women's shelter in the area that's in need of many of the personal care items that we've been getting for free. So, we're starting a box and every time we get something for free or very cheap that we don't need we're tossing it in there. When we get a full box, we'll head down to the shelter.

I've been checking out a lot of blogs lately by women that do a lot of CVSing and couponing to get a ton of items free. One woman just had a yard sale to sell all of her shampoo/conditioner/toothpaste/razor stockpiles and made well over $1,000. I'm not trying to sound like a bitch here, but that made me sick. She got this stuff for FREE. No exaggeration - FREE. Yet, instead of helping many many people who don't have the luxury of toothbrushes or diapers when they flee abusive relationships in the middle of the night, she profited $1,000 from her free goods.

Another thing that I love so much about Corey is that he has such a giving heart. It would never occur to him to do something like sell the free toothpaste we got for profit. We're always thinking of who might need it, and who would think of a new tube of lipstick as a wonderful luxury. It means so much to me that the person I'm with is always inspiring me to be a better person and think of what else I can do to help people that aren't as fortunate.

I love him so much I might even take him my phone number and a Bud Light tonight.

*EDIT: The boy didn't like it so much that I said he was flirting. I will say that the nurses told me the first words out of his mouth when he woke up were to see me, and when I walked around the corner he got a goofy (high) smile on his face and yelled, "There's the love of my life." So, I guess he wasn't really in the doghouse for flirting.
Posted by Christina at 7:49 AM 1 comment: 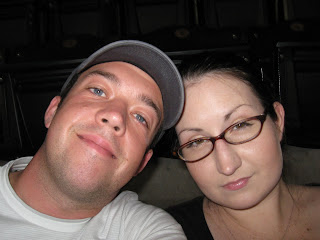 Well, the time has finally come for the boy to get hacked on for once. I'm stomping him in the race to have more medical procedures done, so tomorrow we'll go in and have his silly broken little gall bladder removed.

Truth be told, I'm petrified. The surgeon is wonderful, and I'm sure he's quite capable given his track record. But sitting there in the waiting room is going to be the longest hour of my life! I'm not sure what kind of ipod list you make for these kind of situations, but I'm thinking I need to upload some songs from happy Disney movies.

His doctor sent us home from the pre-op with a very cool website that answers almost any question you may have and walks you thru a procedure. I thought we were actually going to see a video of the surgery, so when we got done with it and hadn't seen blood and gore I figured it was a good idea to google it. Of course youtube obliged and I proceeded to watch an hour or so of gall bladder removals. Emotions ranged from nausea to unbridled fear to thoughts of making a run for Mexico and not going to the hospital. But, unfortunately, I know it's for the best since he hasn't been able to eat or sleep in weeks.

Since my dad and Corey are in a contest over who could grow the bigger gall stone I'm going to have to carry the thing out of the hospital in my purse! I'm not sure what the winner receives, but I know that I better get a new purse out of the deal.

If you could keep the boy in your thoughts we'd appreciate it! I'll make sure to post pictures of the stone when we get out.
Posted by Christina at 12:41 PM No comments:

I think this is a fairly common thing when it comes to blogs, but sometimes I'll click from someone's blog to someone else's and so-on and so-forth until I'm at a complete stranger's blog and have no idea how I got there.

This happened to me last week and I came upon a woman's blog who does something called 'CVSing'. We have a CVS near our house (a few actually) but I've always gotten my prescriptions from Walgreens so I had no reason to set foot in it. Well, it appears I've been missing out on a lot.

I should preface this all by saying that although Corey and I both make what we think are pretty good salaries, we always wonder where our money goes. $100 trips to Target, and $300 trips to the mall, and groceries always add up, and we don't end up saving as much as we'd like to.

I should also say that some people refer to me as a bit of a snob, and although I act offended when I hear it, deep down I know it's probably true. I would never think to use coupons or search for a deal because I never wanted the cashier or other people in the store to judge me. "Oh, look at that poor girl who can't afford her groceries," I hear them saying in my head. Sad, I know. But true.

But, this woman had piles and piles of purchases on her table and beneath it all she said that her total out-of-pocket cost was $0.85!!!! 85 cents for a table full of stuff! I was intrigued.

So, I did a little research and found that there are tons and tons of people who, with a little planning and research, save mounds of money at CVS. Yes, you have to use coupons, and yes you have to search for deals. But, it looked like it was worth it to me. So, I gave it a try.

Here's how I did:

I got it all for $18.71. BUT, I also got $23 back in ExtraCare Bucks (basically CVS gift certificates for future visits). So essentially, they paid me $4 to buy all that stuff!!

I did have to use coupons, and it was very hard for me - but I survived and ended up saving a ton of money in the process. The best part of it is that Corey's mom's best friend has diabetes (no one we know here does) and she can't really afford the $75 monitor for herself. So, we're sending it to her. I'm so happy to be able to give it to someone who needs it - and we got it for free!!!

So, we're going to keep trying the CVSing and see what kind of deals we can get. We're also going to - gasp - cut out coupons for our groceries. Yes, the snob in me hates typing that. But, when we have more money in our savings account for vacations and other big purchases, I think it will be worth it.
Posted by Christina at 12:44 PM 1 comment: