Day of the Monkey 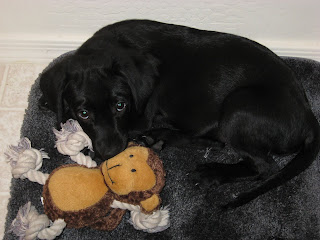 I post this with full knowledge that it may be a case of a proud parent thinking their child or pet is the cutest, smartest and best looking ball of adorableness on the planet when in reality it more resembles a clumsy ape than the Gerber baby. However, I am going to proceed with complete belief that Sprocket is the most precious puppy in the history of the world.

With a bladder the size of a walnut, Sprocket must be taken out every few hours to relieve himself and keep me from scrubbing pee out of the carpets. This works just fine during the day, but at night it is rough because my little puppy experiences an out of body experience when woken up from a deep sleep. In a zombie haze it takes him approximately five minutes to recognize a) that he is, in fact, a dog, and b) who we are and why we are waking him up and dragging him outside. He walks around in a daze, stumbling like a drunkard and running into walls on the way from his kennel to the sliding glass door. Sometimes I can scoop him up, carry him outside, and place him in the grass, and sometimes he seems intent to do it on his own.

This morning around five I got up and stirred him enough to wake him up and coax him out of his kennel, and I walked to the living room to open the door for him. Several minutes later he toppled into the dining room, lopsided from dragging something with him and sideswiping several walls on the way due to walking with his eyes closed. Squinting in the darkness I realized he was bringing his good friend Monkey out to go potty with him.

Since he is, by all intents and purposes, housetrained and a strictly indoor dog he knows what he has to do when he goes outside and I can only assume that he figured Monkey had been cooped up all night too and needed relief. He tottered to the door and marched outside, dragging Monkey along with him across the cement, down the stone pathway, and into the damp grass. He gingerly placed Monkey down in the grass, walked a few feet away to do his business, and then stared at Monkey for a few seconds, yawning, as if he was politely giving Monkey space and time. He then glanced at me, waiting for his pat on the head and "Good Boy!" that is part of his positive reinforcement, received it, and scooped Monkey back up and escorted him down the pathway, into the house and into the kennel where they curled up together and went back to sleep.

All of this took about five minutes and I am convinced none of it was conscious on his part.

Other than managing his cuteness, our little guy has had a busy time of it the last few weeks. Since getting him three weeks ago, he has made four trips to the vet, only to learn that he has two internal parasites, Giardia and Coccidia, common to puppies who are raised in, ahem, not so sanitary environments. We don't fault the rescue association from which we acquired him as I think they do the best they can as a non-profit, and as he resided before that at the county animal shelter there is no way of knowing where he picked up the bugs. We think he is on the up-and-up thanks to his medicine although it causes him to vomit so it is hard to tell. He's the first puppy we've seen who doesn't like to eat, so it has been quite a challenge to doctor up his food with gourmet treats to get him to devour it, and between his anorexia and gut bugs he's on the smaller side of the size range for his age and we're busy trying to fatten him up. I feel like the witch in the Hansel and Gretel fable as I squeeze his belly and weigh him on a daily basis trying to gauge whether or not he is putting on the weight, and resist the urge to slather his milk bones in butter. He may have to go stay with his deep fried grandparents in the south for a month or two if we can't get him a little chunkier.

Until then, we're thinking of making him a puppy runway model.
Posted by Christina at 2:38 PM 5 comments:

Of course I know I'm a grown up - I am the ripe old age of 27 after all - but sometimes the degree of grownupness sneaks up on me, and this weekend was one of those times.

- After a week of getting up every two hours to take Sprocket out, what I was most looking foward to on Friday night was not an exciting night out, or even an exciting night in; I was incredibly thrilled about the prospect of getting seven hours of sleep while Corey was on puppy duty.

- After a trip to the doctor yielded some very unwelcome news I wanted nothing more than to go to church on Sunday. Corey and I have been talking about it for a while now, but I think that was the proverbial straw and I needed to feel a little divine-ness and that I'm not really as forsaken as I sometimes imagine I must be.

- We decided on a non-denominational church that we felt was a good balance between the beliefs we were each brought up with, and got up to get dressed as we were both accustomed to. In my dress and heels I stood out like a sore thumb as the dress code for church now is somewhere between golf course casual and car wash classy. Jeans, cutoffs, tank tops, and T-shirts now classify as Sunday best. I was horrified.

- We budget all of our money to the penny so we can put a large amount in savings. This is not optional as I am the budget nazi at home. This week I'm dying to break our rules and make an unauthorized purchase: the new purple animal Dyson ball vacuum. I'm such a rebel.

- I just pulled a live spider out of the puppy's mouth without even cringing. This shocked even me.

- The smell of pot roast on Sunday made the house so inviting! No, I haven't started eating meat, but the smell makes me happy.

- Last but not least, every day I appreciate my mother and all of her parental nonsense more and more. I KNOW I must be getting old when this starts happening!
Posted by Christina at 9:50 AM 1 comment: 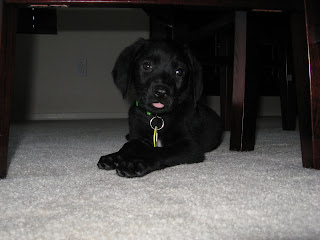 We have a new addition to our family to announce, and as you can see from the picture, it's not the kind that incubates for nine months.

Sprocket came into our family by way of his new Daddy's weakness for cute little dogs with big brown eyes last Saturday from the HALO rescue organization. This non-profit rescues animals that are scheduled to be put down at other shelters and adopts them out at local pet store locations. Why our cute little man would be put down is any one's guess, although I am brokenhearted to understand that it is simply because of the overabundance of homeless animals in Maricopa County and the distinct lack of facilities and volunteers to care for them.

Depressed about the call he received from the radiologist identifying his foot as broken, the boy woke up Saturday morning and began moping around the house. Because we had been talking for months about getting a dog, I quietly transferred some money into our checking account and announced that it was time to go shopping for puppy amenities.

A few hours later we arrived home with dozens of bags containing treats, toys, a kennel, puppy food, and cleaning products (for housetraining mistakes) and embarked upon the journey of finding a new member of our family.

When we walked into the Petsmart we were told the adoptions were taking place in the center of the store and we were upset to find that the puppies available were all chihuahuas and other purse dogs. Dejected, we knew that this kind of dog would never fit in with us as we were sure we wanted a tough dog, good for hiking, walking, and wrestling on the living room floor on lazy Sunday afternoons. As we headed for the door to return home, we noticed a few people gathered around the entrance, one of whom was holding a tiny black pup who looked scared to death of the excitement that was going on around him. Before I knew it, the boy had scooped the baby up into his arms, and the puppy had promptly fallen asleep on his forearm. Lucky for us, this was a secondary rescue association and they were also adopting puppies out. Although I was hesitant to pick the smallest, youngest, quietest pup of the group, Corey was already in love with him, so I filled out the paperwork, wrote a check, and took my boys home.

He's now been with us a week and it is hard to remember a time when he wasn't here. Truly a baby at nine weeks old, he is much like an infant as he needs to be watched constantly and tended to every two hours so he doesn't have an accident in the house. Although things haven't been perfect and we've utilized our new carpet cleaner on several occasions, he is doing quite well at the house training and we're on our way to understanding 'sit' and 'shake' so far. He loves bacon treats, milkbones, and drinking water by the gallon and hates baths and mud. He is also quite the little charmer and enjoys the attention wherever we take him.

Labs are supposed to be quite good with kids so we're hoping that Sprocket becomes the bodyguard for our future children as he has already become my constant shadow during the day, following me from the bedroom, to the laundry room, to the kitchen, without making a noise. He adores sleeping on his daddy's lap (or back, or stomach) while they lay on the living room floor watching college football, and has seamlessly worked his way into our hearts, as if he was there all along.

Oh, and he has his daddy wrapped all the way around his little paw. What took me two years took him all of two minutes.

I guess that's just what happens when your husband falls in love with a dog.
Posted by Christina at 11:18 AM 2 comments: