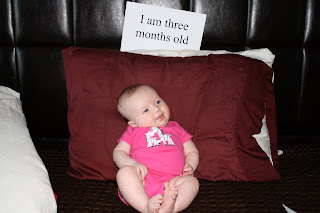 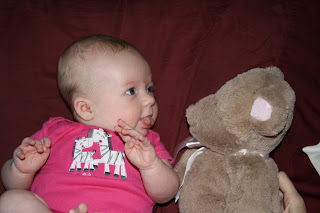 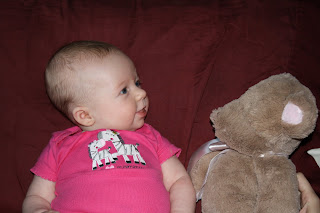 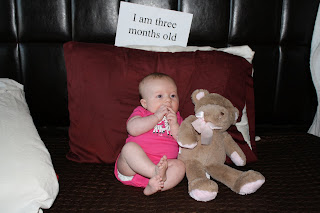 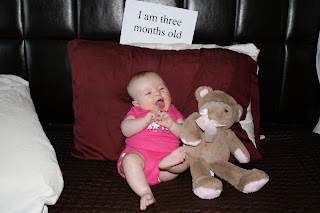 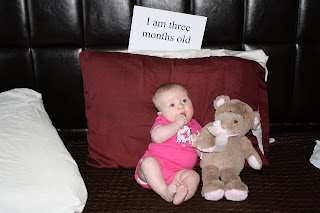 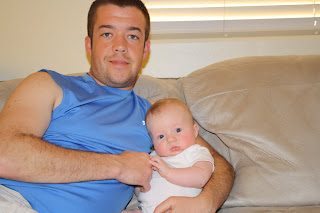 I'm a few days late at this, but it's amazing how time gets away from you with a little one!

This month showed signs of promise and hope - hope that I will survive, hope that Brooke will be able to cast out the demons, and hope that I won't have a voluntary hysterectomy to avoid any possibility of doing this again.

The past few days have given me glimpses of why people do this more than once as Brooke has made it through the majority of the day without having a single meltdown. We still have our bad days where I want to walk out into traffic, but as a whole I am starting to enjoy being a mother.

Yes, that sounds horrible, especially for someone who longed for so many months to do just this, but I'm afraid that infertility actually made it harder for me to cope with the difficult times. While we were infertile I had dreams of dressing my tiny little baby doll up while she gazed at me with loving eyes. I envisioned her cooing up at me in adoration, and squealing in delight at that thousands of dollars of toys we've purchased for her. The reality is so far from that and I suffered from a bitch slap of true life when we were a full 180 degrees from those fantasies.

As far as development goes she is doing just fine. She has rolled over on several occasions, although she has yet to do so with full intent. She loves to munch on her fingers, and grab her toes. She chatters for hours at a time, and now has clear favorites when it comes to toys - a red monkey in a hula skirt, a giraffe with blue feet, and a yellow worm with antenna. Infant toy designers are not very zoologically intelligent.

She does suffer from torticollis, which you can see from the pictures. Her head leans to the right because the ligaments are tighter on that side - probably from being crammed up in the womb that direction. We are doing daily stretches with her, and if it is not better by month four we will start physical therapy. Her doctor assures me (and my research confirms) that not only is that pretty common, but she also doesn't have a horrible case of it.

We also have the added excitement of getting her hearing aids today! I cannot wait to see her face when we turn them on as her hearing loss is something I have mostly made peace with. As a women with a hearing impaired child told me recently, "All children get picked on at some point for some thing and I know that his thing will be hearing aids." All we can do now is raise a strong and confident girl who looks at them (anyone who would dare to tease her) sweetly and tells them to shove it.

Oh, and in the information that only a grandma could care about she weighs 13 pounds and six ounces (a full two pounds heavier than one month ago) and is approx 24.5 inches long. She's a big one for sure, probably because she likes to eat ALL THE TIME. She naps four times during the day for 30 minutes at a time, but only in my arms so I don't get much done during nap time. She also goes to bed at 7pm and wakes at 7am, with four or five rousing fits along the way. I do wish she slept better, but I suppose we will get there in time. The fits can't be too bad anyway because Corey manages to sleep through the vast majority of them.

And speaking of the rest of the family, Corey managed to convince me he needed new golf clubs this month, so here is a picture of his new Cleveland's. I have no idea if they are diamond encrusted, which only seems likely given the price, but they supposedly make him hit like a pro so I succumbed. 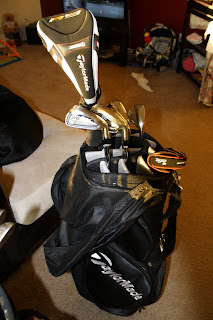 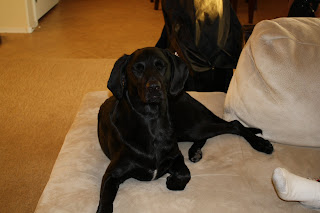 Posted by Christina at 9:39 AM

You make my arm ache to hold all of you. She is the most precious child on the earth and I totally know that I am prejudices but I don't care. Spoken by a true Grandmother!!!! Thanks for picture update, it helps.

She just adorable! My 2nd daughter had the head leaning thing too! She grew out of it without PT! I saw a newborn the other day that had hearing aides and it was the cutest thing ever! You'll have to update us on how she does with them!

Christina - thanks for commenting & reading my blog! For my sleep training, I used some tips from the Sleep Lady's book, "Good Night, Sleep Tight" and also a modified version of Ferber's graduated extinction. I could never do cry-it-out - I don't have the heart for it, so we would put her in her crib (though now she puts herself to sleep, it's the middle of the night wakings that we're still struggling with)...we would let her cry for one minute, then pick her up for a minute, let her cry for two minutes, then pick her up for a minute, let her cry for three minutes, then pick her up...we then repeated the 3 minute (though I think we may need to stretch that to five minutes) portion until she fell asleep - she WILL self-soothe once in a while now (usually at her first waking) but still wakes up within an hour later and cannot be consoled.

I do feel for you because it is SO rough - I have no idea what I would do if I had another child at home because many mornings, I finally give in from exhaustion & let her nurse in my arms while I fall asleep (half sitting up) in bed, for another hour or hour and a half, since she thinks wake-up time is 6:30 AM...which wouldn't be an awful hour if I hadn't been up with her 2-3 times throughout the night.

Let me know if you have any questions - it's still pretty rough, but I'm at least glad that she puts herself to sleep without nursing now...we figured that's been the issue - that we would let her comfort nurse every time she woke up, so she never learned to put herself to sleep (though she has never been a stellar sleeper anyway)!