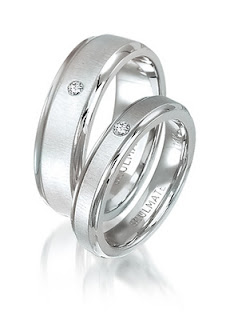 Almost everyone I know is married. What I don't know, however, is how they survived the wedding planning process.

Two weeks ago I sat gazing at my shiny bauble, blissfully unaware of what planning my wedding would mean. First we took the, "Oh, we'll get around to it next year" approach which was quickly changed when the boy reminded me that in order to get the new baby I've been bugging him about we'd have to get hitched first. Well, that was enough to push me into a whirlwind of planning only to realize that this stuff isn't easy. Or inexpensive.

The good part is that it will be small. And when I say small I mean SMALL. With family and friends scattered all over the world (a side effect of life in the military) we decided that planning a short notice wedding and inviting everyone would make for a lot of bad feelings and hurt pocketbooks for those to whom attendance would be a real challenge. So, it will be 20 of our closest friends and family members and that's it.

The bad part is that I was somehow switched at birth with Christina her majesty the Royal Princess of Norway and I have rather expensive tastes. Sure, we could get a whole pig and a keg ala CMT's redneck weddings and call it a day, but that's not exactly how I roll.

The reception was the easy part. Our favorite restaurant has been the scene of many of our most romantic dates, as well as the place where I first taught Corey to be a foodie. Their French inspired American-nouveau cooking is a must have.

Now for the hard parts: a ceremony in the, ahem, desert, that doesn't look like we're in the desert. Somewhere that doesn't care that you won't be buying their pricey catering package and just want to use them for their beautiful garden views before you jet off to greener culinary pastures. Does such a place exist? Maybe with a dusting of fairy dust and a happy thought or two.

And then there's my poor mother who is trying her best to scour the internet for inspiration but who (despite living in Phoenix, Los Angeles and Las Vegas) cannot seem to grasp that it will, in fact, take quite a while to drive from Cave Creek to downtown Phoenix and our guests will be likely to arrive at the reception with In N Out burger remnants on their tux lapels because they were starving at around the 20 mile mark.

Looking on the bright side, I do already have my dress which is something that generally causes a bride more disdain than anything else in planning her day. And I am the google queen so if something exists I will find it by way of the internet. My perfect ceremony locale must be out there somewhere!

I'm sure in a year I will look back and laugh at the drama one single day caused me, but I'm sure I won't regret the memories. So I trudge on with my trusty wedding planner portfolio and arms full of bridal magazines and hope and pray that it all works itself out in the end.
Posted by Christina at 11:39 AM

I think small is the way to go! Good luck and I'm sure you will find everything you are looking for! So when is the date set for?

Small is definitely the best! That's what Millie and I did... in fact, our whirlwind (from meeting to married) only lasted about four months or so (a bit of an exaggeration... but not much) but that was for, ahem, other reasons. In the end, everything has worked out great! I'm just SO happy for you, that life keeps working out and getting better all the time! That's what it's all about... despite whatever you may think about the hokey poky! :)