Looking back at my old posts, I did a horrible job covering the lovely places we visited while on our cruise in April. To be completely fair, I was right in the beginning throes of morning sickness, but it's really no excuse because we stopped in four of the most amazing cities/countries.

If I had to pick one favorite (and the boy agrees with me) it would be Isla Roatan, Honduras. 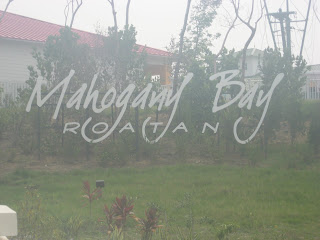 When we arrived it was almost impossible to see land from the ship because the humidity was as thick as pea soup. I think it was only 90 degrees, but with 98% humidity it was a little warm to say the least. We trudged down the road and out of the 'safe' area that the cruise ship had roped off so that you would spend your tourist money with them. I'm sure that cruise lines have the safety of their guests in mind, but we were not at all interested in seeing the tourist trap spots that they deemed acceptable, so we hired a private tour guide to take us around the island.

This was one of the best decisions we made on this trip, and if any of you are ever in Roatan please get the name of our guide from me because he was fantastic!

One of the drawbacks of finding out I was pregnant two days before leaving was that we had to rearrange some of our more dangerous plans, like scuba diving and zip-lining. Roatan is famous for jungle ziplines and I was excited for months to be speeding down the 300+ foot cables towering over the trees. The boy was not quite as disappointed that our plans got canceled though (I have my doubts about whether he could have launched himself off of the platform anyway).

We did a little research before leaving and found the information for an orphanage on the island and were able to talk to the directors before leaving so we had an idea of what the children were in need of. We made a little extra space in our luggage so we stuffed in toothbrushes, toothpaste, deodorant and Uno cards for the kids, and then we had our fantastic guide take us to a local grocery store to pick up some food.

It was so much fun filling up the cart with food that we knew the kids needed, and then we went over to the orphanage and got to meet some of them. A mixed bag of tragic and moving, we met some of the fourteen children that lived at the orphanage - better housing than they would have had otherwise for sure, but so sad to know that life isn't anywhere near fair and by no fault of their own these kids are sharing one big room and fighting over card games instead of playing Wii on their flat screen like so many children in the U.S. are doing right now. 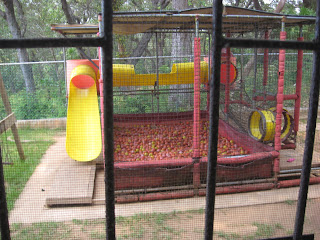 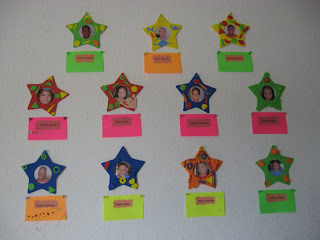 Honduras does not grant international adoptions as a rule, so the only hope these children have is being adopted by a family member or a community member. Because of the extreme poverty on the island, realistically the best they can do is hope that the orphanage is able to consistently fund their bilingual education so that they can get a job in tourism and be able to take care of themselves when they reach their late teens.

After the orphanage our guide took us on a full tour of the island, from coast to coast. We felt like we were on the island of "LOST" and could rarely believe the contrast between the shack housing and the raw beauty of the land around it. And, as it usually is in places such as this, the class distinction was amazing. Normal houses: 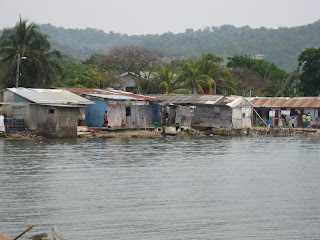 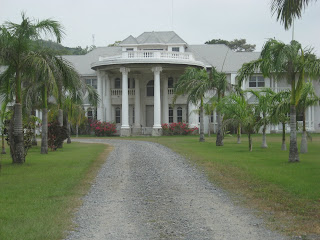 We also went to a private 'petting zoo' that had lemurs, monkeys, and anteaters that you got to play with. The boy narrowly missed a poo incident with a lemur but the monkeys were amazing to play with - they especially liked my water bottle. I often think of my beagador as a little monkey and these guys did little to dispel that thought. 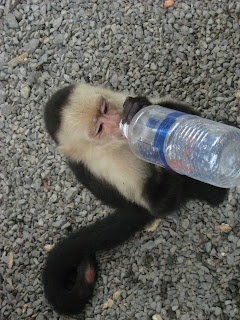 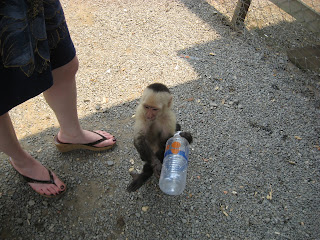 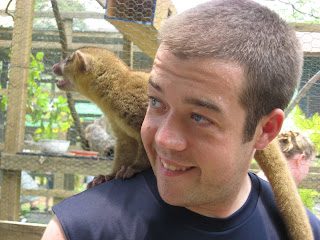 I wish we could have spent an entire week here, and maybe someday we will. Roatan has some of the best reef diving in the world so there are many diving resorts on the island. We often think about going back for a week, and drooled over the photos on their website just yesterday. I think it will be a little while before the peanut is travel-ready, but as soon as she is we can't wait to show her the world starting with beautiful, raw places like Roatan.
Posted by Christina at 4:11 PM

When the peanut is travel ready you can come up and drop her off, she will be totally spoiled by then but we will have a great time. You will have to wean yourselves from having her around all of the time but you can start with baby steps. Everything begins with baby steps. Remember your trips with Nana and Papa? They were hard on us to have you gone but you had a great time and the spoiling didn't totally ruin you.